The Chevrolet Spin. My first thought when I saw this thing: praise the Lord in heaven and all his angels this thing isn’t coming to our roads!

That’s because the Chevrolet Spin is only going to be sold in Asia and South America. It has been designed by GM’s design unit in Brazil, where it will also be built. Indeed, we Europeans will have nothing to fear from this spacious monster. It really is butt ugly.

The Chevy Spin is actually a bigger, MPV version of something else that’s ugly and won’t be polluting our streets: the Chevy Cobalt. The Cobalt is a compact car, also designed in Brazil, and intended for those markets in the world where consumers appreciate extra hindquarters, i.e. where people like saloons / sedans. Think of places such as China, India, South America, Africa and a handful of European countries, such as Turkey. In such markets they seem to dig the sedan because it creates the illusion of a bigger car, at least that’s what I grabbed from an Indian colleague of mine.

Never mind, back to the Spin. The Spin is thus an MPV – Multi Purpose Vehicle – based on a compact sedan. Consequently, it can’t be too big either, you’d think. But don’t be fooled. The Spin takes along up to seven people or up to 1,668 litres (367 gallons) of cargo when the back bench is folded down. That’s pretty big!

That, plus the fact that the Spin is very likely to be cheap, leads me to believe that this thing will find a whole bunch of owners in markets where it’s going to be sold, despite the fact that it’s only available with an underpowered (around 106 bhp) 1.8 litre four-cylinder (running on either petrol or ethanol). Besides, I’ve been to China, the biggest of GM’s target markets for this car – though admittedly not to most of the other aimed at places – and I’ve seen the cars there. The Chinese don’t seem to be bothered by aesthetics. In fact, they don’t even seem to grasp the concept of automotive design.

The roads are full of turds on wheels – anything designed locally basically – and this Spin would only be one of the least ugly. Success almost guaranteed! 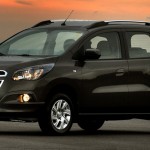 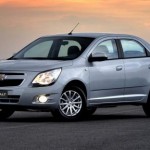 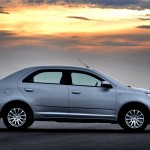