Renault says its new Captur is arguably the most stylish, versatile, frugal and keenly priced addition to the supermini crossover market yet. 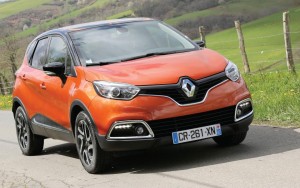 The car maker has high hopes for the Renault Captur and will be looking to emulate the impressive start for its new Clio, with which it shares its underpinnings and much of its style.

With keen pricing and a series of life-simplifing features up its sleeve, it will also be looking to make serious inroads in the booming B-segment crossover class.

Led by its sister car, Nissan Juke, the market’s already growing fast on the back of the Mini Countryman and the slightly larger Chevrolet Trax and Vauxhall Mokka. It’s expected to explode even more with the future launches of rivals such as the Fiat 500X, Ford EcoSport and Peugeot 2008.

Renault’s latest compact car, Captur (pronounced “capture” in the usual British way, without the ‘e’), takes its name and inspiration from the striking three-door concept from 2011.

With UK prices confirmed from £12,495 on-the-road, the Renault Captur undercuts the current class top-seller by £500.

The Renault Captur has an impressive specification.

There’s also a huge range of options including a reversing camera and metallic paint.

Available to order now, the Renault Captur will be in our showrooms from July though, as I keep highlighting, the best way of buying one is very likely to be with a leasing package.