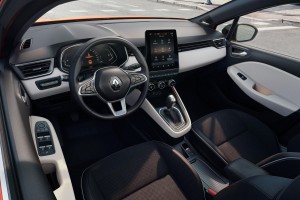 The Renault Clio has been redesigned to create an impressive fifth-generation of what Renault says is an automotive icon.

Since its launch in 1990, more than 15 million units of the Renault Clio have been sold and the car now enters its fifth generation with an all-new creation.

The car is Renault’s bestselling model around the world and it’s been a popular choice with UK buyers as well.

The all-new Clio has a more athletic and modern design and offers, the firm says, ‘evolution and revolution’.

More details will be revealed after its Geneva international motor show debut but there are elements of the previous four generations of the Clio that make themselves known in this new model.

The interior has been well-designed and utilises high-end materials and drivers get to enjoy a new ‘smart cockpit’, which features a 9.3-inch vertical multimedia screen.

Multi-media screen is the largest ever fitted to a Renault

This multi-media screen is the largest ever fitted to a Renault car which helps to enlarge the dashboard and give a contemporary feel to the cabin.

There’s also the firm’s Easy Link connection system so the infotainment, satnav and multimedia features are in one place and are easy-to-use.

There’s also a 10-inch touchscreen for the instrument binnacle and the new seats have been designed for comfort and there’s more legroom for rear seat passengers.

The screen itself can be customised to help improve the driving experience to the driver’s needs and it’s also one of the largest screens in its segment.

There are, in all, eight interior design schemes with lots of customisation available for buyers.

Big plans for its Clio

Renault says it has big plans for its Clio and says there will be 12 electric models in the range by 2022 and more connectivity too.

There’s even a new steering wheel, Renault says it’s more elegant, though drivers will find it’s more compact which boosts the visibility of the dashboard.

The centre console has also been revamped for better ergonomics and it’s also where the shorter gear lever is and this has a comfortable and natural grip.

The central console can also be customised depending on the driver’s choice of interior design scheme and there’s also ambient lighting on its outer edges.

The Renault Clio’s door panels are unique to the segment and these have a soft material finish with the inserts helping to diffuse the ambient light.

Essentially, the all-new Renault Clio has a lot to recommend it and there are lots of drivers in the UK who have loved a Clio previously and they may be tempted back behind the steering wheel with this new offering.