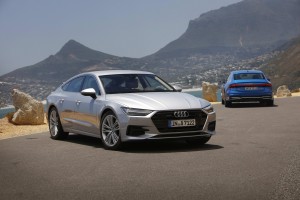 The new Audi A7 Sportback will impress.

This is the excellent all-new Audi A7 Sportback which arrives in our showrooms in April.

The Sportback will take on its rivals with an impressive new exterior redesign and helped with lots of new tech on board, as Audi drivers would expect.

There is also a new ‘mild’ hybrid system available for each engine in the A7’s line-up – essentially, a small electric motor will see the powerful, thirsty engine automatically deactivated whenever possible to save fuel.

Engines for the Audi A7 Sportback

As potential drivers should expect, the performance levels for the A7 Sportback will be impressive with the diesel engine reaching from 0 to 62 mph in 5.7 seconds and on to a top speed of 155 mph. Its economy will be around 51 mph with emissions of 147g/km.

For those looking at the Sportback with the petrol engine then the 0 to 62 mph time is 5.3 seconds with a similar top speed of 155 mph and its fuel economy will be 40 mpg with emissions of 158g/km.

Audi A7 Sportback is shorter than the model it replaces 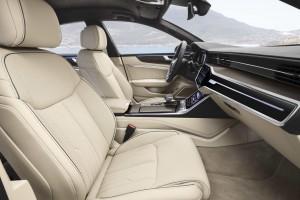 The new Audi A7 Sportback is shorter than the model it replaces but is built on Audi’s latest platform and has similar measurements for the car’s height and width; the wheelbase for the new A7 Sportback is slightly longer which gives it more cabin space.

The interior also relies heavily on the Audi A8 for its design with the infotainment system that features two screens for controlling the car’s functions.

The automatic parking system also has a rear view camera and along with lane departure warning and an automatic braking system, there’s also a front collision warning system.

The UK version of the Sportback will have high spec levels which will be called Sport and S line. Along with 19 inch alloy wheels, leather seats that are fully electric there’s also an LED ambient interior lighting and LED rear and front lights.

The technology also features Audi’s virtual cockpit along with satnav and a smart phone interface plus wireless charging.

The all-new Audi A7 Sportback will be available for first deliveries in April with prices starting at £54,940 OTR.