So here it is. What Kia describes as the most eagerly anticipated new model in their entire history.

With a starting price of just £19,995 this pro_cee’d GT is seriously cheap and still comes with Kia’s very attractive seven year warranty.

Can Kia really come up with a satisfying performance hatch? Read on to find out more…

The three door pro_cee’d is a great starting point as it’s certainly a looker. The GT gains the usual sporty touches. There’s gloss-black honeycomb grills at the front, a saucy red pinstripe on the lower edge of the bumper and menacing looking ‘ice-cube’ LED DRLs to complete the look. I think it has oodles of road presence and is arguably more butch than a number of its rivals.

Inside its got red stitching everywhere and grippy Recaro leather and faux-suede sports seats which pin you in all the right places. Red GT emblems on the steering wheel, floor mats, seat faces, kick plates as well as alloy pedals are reminders you’re in something a little special. 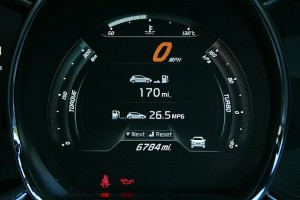 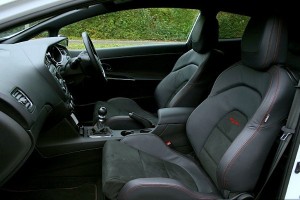 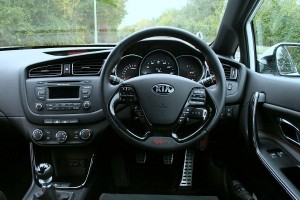 It feels posh inside, as the cabin is constructed using swish materials throughout, and the black headlining and low roofline make occupants feel cocooned although there’s no shortage of space. The dials too are very cool as the central dial is an LCD TFT screen which has two different displays that change by hitting a button labelled ‘GT’ on the steering wheel. In GT mode a digital speedometer is displayed with turbo boost and torque metres either side.

Under the bonnet Kia has fitted the GT with a 1.6-litre direct-injection petrol engine with a twin-scroll turbocharger. It’s similar to the unit found in the Hyundai Veloster Turbo but produces 201 bhp and 195 lb ft of torque between 1,750 and 4,500 rpm. Shorter gearing enables the Kia to scamper to 60 miles-per-hour in 7.4 seconds.

Because of the good wedge of extra grunt the pro_cee’d has had its suspension lowered and stiffened with a thicker rear anti-roll bar and larger brakes. From the moment you set off, the chassis’ new-found tautness is evident, but the ride is still pliant and deals with bumps exceptionally well. Even when it does encounter a deep rut it remains composed.

Throw the GT into a corner and there’s not much lean but bags of grip although it isn’t quite as agile as it could be. The steering is pleasingly meaty but is inconsistently weighted so doesn’t feel very natural although it is accurate. I was a little disappointed with the brakes though, which are responsive but can suffer from fade when you really work them hard. 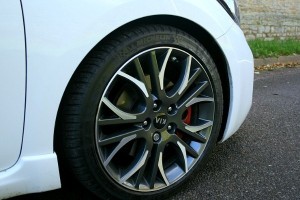 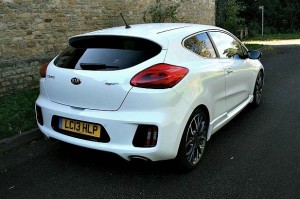 The GT may be down on power compared to its more hardcore rivals but it’s far from slow. Short gearing makes it feel much quicker than the figures suggest, and once the turbo kicks in, all hell breaks loose. You really do get shoved back in your seat as you hurtle forward and the power keeps on coming.

The only minor annoyance is the engine’s slightly strained soundtrack that only gets worse the more you put it through its paces. That said, when you aren’t thrashing it, the pro_cee’d GT is quite refined. The external noises remain hushed and the composed ride make it ideal for lengthy journeys.

Running costs are a little more expensive than rival potent hatches despite the GT’s power deficit. Kia say you should get 38.2 miles-per-gallon on a combined cycle but you would need to drive the pro_cee’d GT like a nun to achieve anywhere near that. The most I could get was 28 mpg which is probably more realistic. Emissions are a little on the high side too kicking out 171 g/km of CO2 placing it in VED band H (£195 per annum)

Perhaps the pro_cee’d GT’s biggest draw is its £19,995 starting price which represents superb value for money. That’s around £6,000 cheaper than a Golf GTi and nearer in price to Peugeot’s 208 GTi which is quite a bit smaller. The Kia isn’t short of kit either with standard fit automatic headlights, air-conditioning, cruise control, reversing sensors, Bluetooth, electrically folding/heated door mirrors and part-leather trim.