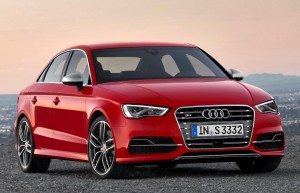 These are the first ever ‘three-box’ A3 and S3 models and offer lots of passenger and luggage space in a compact footprint.

There are two TFSI – 1.4 litre and 1.8 petrol engines and one TDI at launch in the Audi A3 Saloon range with the petrol engines having Cylinder-on-Demand (CoD) technology.

Depending on the engine chosen, the standard transmission is either a manual six-speed or the S tronic dual-clutch gearbox. S tronic shifts without any noticeable break in power and is controlled by either the selector lever or paddles on the steering wheel.

Economy for the Audi A3 is suitably impressive with the 1.4 litre TFSI capable of up to 60.1mpg and the all-new 2.0 litre TFSI S3 having the potential (and slightly less impressive) of 40.9mpg.

The design of the Audi A3 Saloon is a cross between the classic three-box concept and the coupé philosophy. Its overhangs are short, and its ‘tornado line’ design element forms a distinct light-refracting edge that runs along the entire side.

The all-new Audi A3 is already famed for offering the finish and feel of an executive class car, and as if to emphasise the point it now has the boot to complete the impression.

The first ever booted Audi A3 begins the carmaker’s foray into the world’s largest market segment – the compact saloon class.

Like its hatchback counterparts, the Audi A3 Saloon makes use of the new modular infotainment system (MIB). The most sophisticated of its modules is MMI Navigation plus which comes with an SSD hard drive offering 64 GB of storage, a DVD drive and voice control.

There’s also an interface with mobile phones and mobile players via Bluetooth. The user terminal has a turn/push control designed as a ‘touchwheel’ with MMI touch – the touchwheel’s top surface is a touch-sensitive pad for inputting letters, symbols and numbers.

Soon after the launch of the new Saloon range, its flagship – the Audi S3 Saloon – will make its debut. Its 2.0-litre TFSI engine produces 300PS and 380 Nm (280.27 lb ft) of torque, and combines highly advanced efficiency technologies – dual fuel injection, exhaust manifold integrated in the cylinder head, the Audi valvelift system and a rotary valve module for thermal management.

The all-new A3 Saloon range and the 300PS S3 Saloon flagship are available to order in the summer with deliveries of the A3 coming in the autumn. The S3 won’t be coming until next year.

Audi aren’t saying how much these cars are going to be but anyone interested in buying one should compare their leasing costs with purchase costs before actually buying the Audi A3 or the Audi S3.