I saw a Fisker Karma on the motorway today. I admired its smooth lines and noticed something funny.

The Karma is a plug-in hybrid sports car, meaning as much as that it’s electric and fast at least for a short distance. The faster you make it go, the shorter the distance over which it will be electrically powered. And in any case, that won’t be much more than 51 miles, which is the car’s official electric range according to German certifying agency TÜV. After that the batteries run dry and the conventional 260 hp, 2.0 litre General Motors engine has to jump in to save the day.

Now, the funny thing I noticed today really fooled me; namely, the Karma doesn’t seem to have an exhaust, making me believe for a brief moment that I was glancing at a 100% electrically powered car. Instead, the car has two diamond-shaped chrome caps right about there where you’d normally find an exhaust. Smart design concept, because a car that has no exhaust must be clean, right?

But actually, the Fisker Karma does have an exhaust. Two as a matter of fact. And it’s obvious, because that 2.0 litre petrol engine wouldn’t be able to do its job without having a way to spit out its combustion gases. The Karma exhales somewhere else; it has side pipes, located right behind the front fenders and only noticeable by those that look for it. Brilliant!

I noticed something else about the Fisker Karma. It’s incredibly beautiful, while spacy and different at the same time. Even though it’s my modest opinion that electric cars that need combustion assistance aren’t really the future, it does look like the future.

It shows that being green doesn’t necessarily mean you have to drive an ugly mutt for a car. 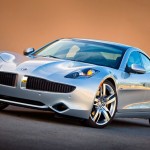 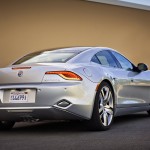 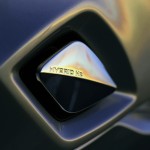 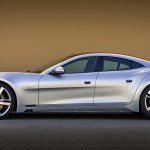 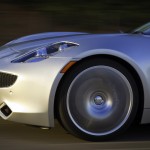