When carmakers are doing a new concept of an old model, they’ve only got their own automotive heritage to base it on. So, when you’re Mercedes-Benz, you might as well use the first automobile ever made for inspiration.

It was 1886 when a chap named Karl Benz filed a patent for his Benz Patent-Motorwagen. It may not have seemed like much more than a three-wheeled carriage lacking a horse or two, but the vehicle was stuffed with new inventions for that time; chain drive, 1-speed transmission, solid rubber tyres and spring suspension.

The first engine was an almost-one-litre one-cylinder four-stroke, producing a ‘stunning’ 2/3 horsepower and weighing ‘only’ about 220 pounds. Later versions of the Motorwagen had improved engines, first with 1.5 horsepower and then with 2. The latter allowed the three-wheeler of attaining a top speed of 10 mph. Using actual horses would’ve been faster, but that wasn’t the point. Benz and his wife Bertha showed the possibilities and by 1902 an American driver drove a combustion-powered French car, a Mors, to a top speed of 76 mph. In 1922 Sir Malcolm Campbell reached an official record of 134 mph in an 18.3 litre V12 Sunbeam.

Anyway, back to Mercedes-Benz. In 2009, the company presented a concept designed by a group of 150 trainees over the course of a year. Had it not stayed a concept, the F-CELL Roadster would have been very much alike the Motorwagen of 1886, and not just in styling. The concept uses a fuel cell power source, as new a means of propulsion now as the combustion engine was at the end of the nineteenth century. Also alike is the fact that it has less than 2 horses worth of power and isn’t very fast – though its 15.5 mph isn’t as snail-like as its forefather’s top.

The car’s styling makes you wonder about the possibilities with a fuel cell propulsion. At 2 bhp and 15.5 mph is doesn’t look very useful, but then again, neither was the Motorwagen in 1886. Maybe in a few years hydrogen-powered cars will be common road users, once people realise it’s a much more viable alternative than EVs.

You’d almost forget that Honda has already had the FCX Clarity on lease offer in selected markets since 2008. It’s a completely normal mid-sized sedan, boasting 136 horses and a V-max of 100 mph. And contrary to an electric car it can be refilled in just a few minutes. 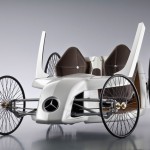 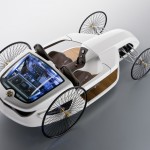 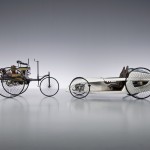 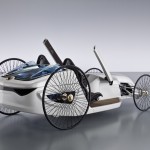