I’m not 100% sure if they were the first, but at the back end of the nineties, VW came up with a new incarnation of a (very) old model: the New Beetle. Since then, many carmakers have followed suit.

Mini is probably having the biggest success to date with its Mini. That’s to say the original reincarnation, not all the mutant bastards it’s turning out these days – though the Rocketman is awesome, yet still remains a concept! At the same time Fiat’s hitting it big time with their modern 500. And what to say of similar efforts on the faster end of the automotive spectrum, such as the Ford Mustang, Chevy Camaro, Dodge Challenger and Mercedes SLS?

Brilliant as some of these may be, I’ve recently found that it’s even more fun to look at some retro-styled concepts that never made it into mass or series production. Or sometimes they’re just designs by hobbyists with too much time and creativity on their hands. Figured I’d make a regularly returning series out of this, because there really are so many great examples. And we’ll start today with a modern interpretation of the Renault 4, designed by an Italian with a German name for a competition held by the French carmaker.

The ‘Revival of a Childhood Impression’ is David Obendorfer’s submission to the contest held in 2011 to celebrate the original Renault 4’s 50th birthday. The result is a combination of modern lines and the classic’s features, coming together in such a way that none of the original’s smallness and cuteness is lost. It shows us how a car can be both simple in design, practical and incredibly charismatic. Something modern cars do not exhibit often anymore.

Renault ought to pass Mr. Obendorfer a big bag of money and then start producing this baby as the “New Renault 4“. In orange please! 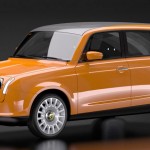 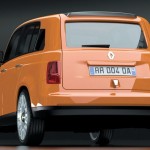 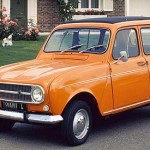