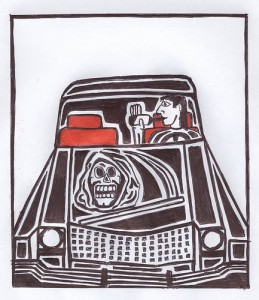 A former government adviser has suggested that all cars should have some type of alcohol sensors fitted in them. The idea, which has been concocted by Professor David Nutt, is to cut down on drink driving levels in the UK.

The driver would need to breathe into the sensor before driving off, and a level above the legal alcohol limit would result in the car not starting up. The AA has called the suggestion “impractical”.

Professor Nutt said that a similar device (called alcohol ignition interlock devices) is used in other countries in the vehicles of those motorists who have been convicted of drink driving in the past. His idea is to fit one of these machines in every car which is on the road in the UK.

It’s a nice idea but I have to admit that I don’t see it as being particularly workable. Surely if you were under the influence and knew it you could get someone to breathe into the device on your behalf? I guess that if it saves even one life then it is worth it but wouldn’t it be nice to finally find a foolproof solution to this age old problem of drinking and driving.

I think that there is so much publicity out there about the effects of drink driving that anyone who still does it knows the risks and it willing to break the law in order to do it.

Personally I don’t know that there is much more that can be done to stop drink driving. It is something I have never understood and will never understand. It seems that French motorists need to carry a breathalyser in their cars. The AA statement, from AA president Edmund King, points out that because alcohol takes time to enter the drinker’s bloodstream they might be under the limit when they start out but over it after a spell of driving.