It’s a while ago and it may have been bigger news in the Netherlands, due to the fact that it was a Dutch company that played cavalry to the company’s rescue – unfortunately they ran into a General Custer-inspired bloodbath – but I’m sure you know this: Sweden’s Saab is no more.

Saab was sold by GM to Spyker, a Dutch sports car builder that has been pretty much loss making for as long as it exists. The alternative was to pull the plug on Saab and so Victor Müller, CEO of Spyker, was given a heroic reception when he came to inspect his new plant after the deal. He had ambitious plans and ideas, but it didn’t take a year before the company walked into a quick sand of cash flow problems. A ridiculously long soap ensued and in the end salvation was there in the form of Chinese investment.

However, GM, who, to protect its technological interests, still had a say in the matter as part of the sales agreement with Spyker, blocked the road forward for Saab. Some nonsense reason about them not wanting their tech IP to flow into China and all that. Like GM doesn’t already have and run its own plants in China, like the technology that Saab made use off was so incredibly high-tech and like the Chinese don’t already copy anything anyway!

Well, proof of that has landed once again, in the form of news about the iminent C70G by Beijing Automotive Industry Corporation (BAIC). C70G, that’s a name that makes me think about Volvo, that other Swedish carmaker, and it’s not the only thing about it that has that effect. Those headlights are a 100% rip-off from the new S60. The grill they took from a C-class Mercedes by the way. But you can’t blame them.  It takes time to set up an automotive industry that can churn out quality problems and copying is just the fastest way to get there. They’ll get there soon enough, don’t worry.

On the other hand, I have more of an issue with GM. Why? Because underneath the skin of the C70G is a Saab. The old 9-5, the technology of which Saab sold to BAIC back in 2009. Just to be clear, Saab was still owned by GM at that time. Makes you wonder, doesn’t it? It seems GM wasn’t at all worried about its technology when it said ‘no’ to Saab’s Chinese aid and just saw an easy opportunity to commit homicide on a potential future competitor.

So died one of the last automotive companies with a very own, distinctive character. And now it reincarnated in the body of a not-so-pretty mongrel that lacks exactly this soul. 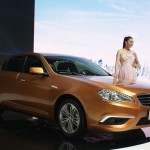 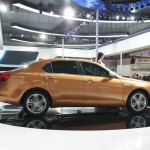 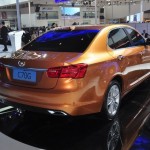 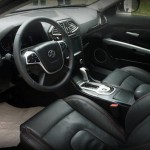