Massive demand from around Europe for the Ford Kuga has led to production being increased by 10%. 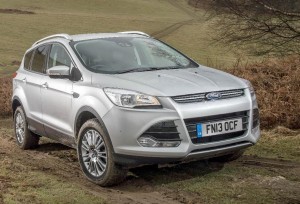 As a result, production of Ford’s latest smart utility vehicle is expected to reach 100,000 units annually for the first time.

Demand in the UK is helping drive the Ford Kuga’s production growth.

Since the Ford Kuga was launched at the end of last year, more than 8,000 orders have been placed as families switch to SUVs from conventional saloon cars.

Ford has said it expects to sell more than one million SUVs in Europe in the next six years, making up 10% of all Ford’s sold by 2016.

Ford Kuga sales and share in the UK were both up in March 2013, compared with last year.

The firm is also launching its all-new compact EcoSport, which is based on the Fiesta platform, at the end of the year.

The new Ford Kuga achieved a Euro NCAP overall protection score of 88%, the highest-ever for a mid-sized SUV, as well as a Euro NCAP Advanced reward for the Ford SYNC with Emergency Assistance system, which  calls emergency services in the appropriate local language for the region following an accident.

The Ford Kuga was widely acclaimed by the media when it was unveiled and buyers can expect a decent car which is well made and is packed with ‘extras’.

As usual with new cars, it might be a wide move to check out the leasing costs for the Ford Kuga before actually buying one.