The Seat Leon SC, which is an impressive three-door version of the car, is going on sale at £300 less than its five-door stablemate at £15,370. 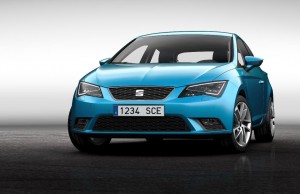 That’s actually good value for the car which has the engine and trim range as the Seat Leon five-door.

Though Seat stresses that its Leon SC is far from merely a three-door version of the five-door hatchback – it is a true ‘Sports Coupé’, with an exterior redesigned from the A-pillars back. With a lower roofline, a more steeply raked rear screen and a redesigned tailgate, the Seat Leon SC is a beautifully designed car.

But the Seat Leon SC loses very little by way of practicality compared to the five-door version, with a large boot of exactly the same 380-litre capacity, and more than enough rear leg and headroom for adults. It also has a dozen cubby holes and five closed containers for storage.

The Seat Leon SC also has high standard specification and incredible fuel economy across the range with CO2 emissions as low as 99 g/km.

The car, along with some new rivals, is also impressive with its fuel consumption which has a combined figure of 74.3 mpg for the 1.6 TDI 105 PS.

The priciest Seat Leon SC is the 2.0 litre Tdi DSG which has fuel consumption of 68.9 mpg.

As per the five-door range, FR trim is the pinnacle of the Leon SC at launch, available only with the more powerful engines in the line-up. FR trim gives buyers access to SEAT Drive Profile, which alters the driving characteristics of the car through three modes, plus an individual mode which drivers can use to personalise their settings.

Every engine in the Seat Leon range, petrol and diesel, is equipped with Start/Stop System and Energy Recovery to lower consumption and CO2 emissions, it is termed by Seat as its ‘Ecomotive Technology’.

This is the second generation Seat Leon SC and it will begin appearing in UK showrooms in July and precedes the introduction of an ST estate, due before the end of the year.