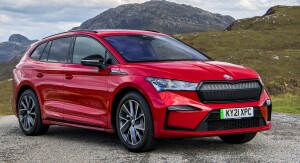 The Skoda Enyaq iV car lease range is already one of the best electric SUV line-ups, and it has now been boosted with the all-wheel drive 80x SportLine.

This is the most powerful Enyaq iV yet with a power output of 265 PS with the extra grip from the 4×4 system underpinning the startling performance.

The new model has a second electric motor fitted for driving the front axle, and with two electric motors, the 0 to 62 mph sprint time is 6.9 seconds.

That’s partly down to the 80x SportLine offering much more torque at 425Nm than the rear-wheel drive SportLine version.

The SUV also features 125kW rapid charging capability as standard so the battery can be recharged to 80% of its capacity in 38 minutes. 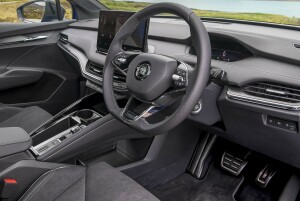 It helps too that for boosting agility, the Enyaq iV 80x SportLine has a sports chassis setup.

Drivers will have a body that’s 15mm lower at the front – while at the rear it’s 10mm lower than the standard model.

This helps to reduce the SUV’s centre of gravity to boost handling and there’s the option of dynamic chassis control to improve the fun behind the wheel even further.

This is also a well-equipped car and there are unique black sport seats upholstered in Alcantara/leather.

The new model also features a multifunction leather sports steering wheel with three-spokes that will control various vehicle functions from the wheels and buttons.

The lower spoke of the steering wheel also features the SportLine badge.

Prices for the 80x SportLine start at £46,610 OTR which makes checking out the contract hire deals for the Skoda Enyaq iV a worthwhile undertaking.