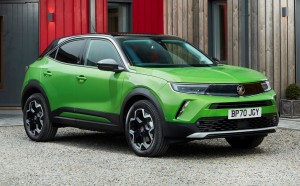 This is the new Vauxhall Mokka which is available as a car lease with diesel and petrol engines along with an all-electric version.

For company car drivers particularly, the Mokka-e is a zero-emissions creation that will deliver a 201 miles range from a single charge.

Along with the new design language for future Vauxhalls, there’s also lots of excellent technology onboard.

However, the contract hire Mokka-e will attract lots of attention since electric vehicles are growing quickly in popularity.

This particular model has a 100kW electric motor producing 136 PS and is powered by a 50kWh battery.

Vauxhall also refers to this as a ‘BEV’ which stands for ‘battery electric vehicle’ and there’s torque of 260Nm to deliver a rewarding drive.

More importantly, the battery can be recharged to 80% of its capacity in 30 minutes using a 100 kW rapid charger.

Engines for the Vauxhall Mokka lease 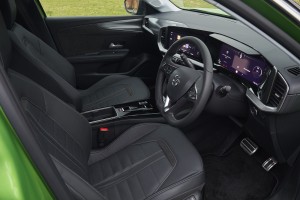 The Mokka has a choice of two petrol engines, a 1.2-litre turbocharged unit producing 100 PS, or 130 PS.

There’s also a 1.5-litre diesel engine with fuel consumption of 66 mpg, and emissions of 114g/km.

The power from the engines is delivered using a six-speed manual box, or the firm’s eight-speed automatic transmission.

The new Vauxhall Mokka is also lighter than the previous version and there are new design techniques being used.

For the premium Mokka models, they have a 12-inch digital instrument display with a 10-inch colour touchscreen.

Every Mokka also has a smartphone compatible infotainment system, along with hands-free calling, DAB radio and Bluetooth connectivity.

Vauxhall has also added its e-call system to the Mokka which will contact the emergency services should it detect the car has been involved in an accident.

The Vauxhall Mokka car lease offers an excellent compact SUV in a competitive segment and it is certainly a car worth shortlisting for those who want a well-equipped, cheap to run vehicle.