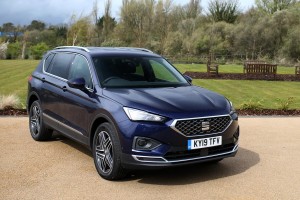 The new Seat Tarraco is a flagship model for the car maker and its first large SUV.

This is the impressive new Seat Tarraco which is the firm’s first large SUV and sits alongside its other offerings, the Ateca and Arona.

The new model has already become something of a flagship for the carmaker and with seven seats, it’s the firm’s biggest SUV production.

The car also offers hints of what the firm’s future design language is likely to be with a new lighting signature and a new front end.

And while it’s entering a competitive segment, the Tarraco delivers agile and dynamic handling, practicality and lots of technology.

Seat says that from next year there will be a plug-in hybrid version available.

The engines have turbocharging and direct injection along with start-stop technology to boost the economy. The Tarraco’s top speed is 126 mph from the 2.0 litre TDI 150 PS unit.

Trim levels for the Seat Tarraco 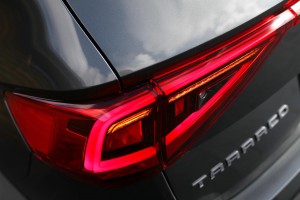 There are four trim levels for the Seat Tarraco with a Sport choice being added later and but drivers will get to enjoy an SUV they can happily take off-road thanks to the ‘total traction system’ called 4Drive to help deliver a safe and responsive drive when doing so.

There is a large boot of 230 litres which extends to 1,775 litres and drivers get a digital cockpit with a 10.25-inch touchscreen and there’s also an 8-inch floating central display.

As should be expected, there is a lot of safety kit included such as emergency call, lane keeping assist and front assist. There’s also an electric tailgate with a virtual pedal, parking assist and a top view camera system.

The interior has a practical and comfortable design and will be an ideal choice for families and also for those who enjoy rugged, off-road adventures.

One reason for the excellent handling is the new chassis that delivers the dynamic performance, both on- and off-road.

Seat continues to enjoy a sales success story in the UK and they have high hopes for their new flagship model.

The new Seat Tarraco is undoubtedly a great creation for a competitive segment and while it has been designed in Spain, it’s actually built at the VW factory in Wolfsburg, Germany.