This is the bold-looking BMW X4 which will open a whole new niche for the carmaker and will, claims BMW, offer buyers the sporting elegance of a coupe and the agility of an SUV. 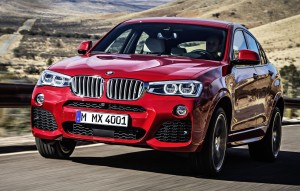 The new BMW X4 – set to be a bestseller?

The result is that the BMW X4 is the marque’s first ‘Sports Activity Coupé’ for the segment.

There’s a choice of three engines in what is an all-round impressive offering from BMW which also incorporates the firm’s xDrive all-wheel drive system and is packed with standard equipment.

Engines and economy on the BMW X4

The engines allow for a sports car-like performance with high levels of fuel efficiency with the entry-level BMW X4 xDrive20d SE reaching 0 to 62 mph in eight seconds. It has a top speed of 132mph while offering fuel economy, on the combined cycle, of 52 mpg while having CO2 emissions of 143g/km.

Potential owners also have the choice of a BMW X4 xDrive30d xLine, and the top model is the xDrive35d M Sport which has an awful lot more torque than the entry model and will reach 62 mph from rest in just 5.2 seconds.

Its top speed is 153mph and has fuel economy of 47 mpg on the combined cycle. Its CO2 emissions will be 157g/km.

BMW X4 has lots of kit as standard

Based on the BMW X3 platform, the X4 is slightly longer and also closer to the ground to help improve its dynamic profile and balance. The car’s design also helps with its sporting characteristics and it provides a rewarding driving experience.

However, the X4 looks quite similar to the BMW X6 and has a lot of its abilities whilst maintaining a sporting elegance which are matched with an unmistakable coupe-like look as the roofline drops down to meet the tailgate.

Inside, the BMW X4 looks unmistakably like a BMW should with lots of high-gloss black panels being used and aluminium trim strips to give it a sporty feel and look.

Options include an xLine trim which will add a different alloy wheel design, a dark copper interior trim, and sports seats trimmed in xLine ladder.