Apparently some smart dudes at the Massachusetts Institute of Technology have invented a camera which can accurately measure distances when looking through translucent materials.

Big deal, huh? That’s what I thought at first but then I read on and discovered that this meant that it could be used to help drive in foggy conditions. Since fog is now one of my least favourite driving conditions I decided that it might be a good thing after all. It also got me wondering what the absolute worst driving condition is. 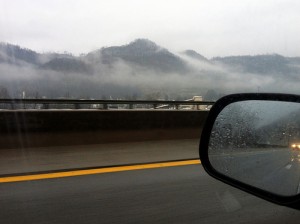 I’ve only really been caught out driving in really heavy fog once, and it was my own stupid fault. I moved to live in Edinburgh and everyone warned me about the incredibly dense sea fog called Haar which sometimes comes rolling in over the city. Yeah, yeah. As if a bit of fog was going to scare me. Anyway, one night when some fog was forecast I went out for a drive and suddenly found myself in the middle of a giant ball of cotton candy or trapped in the middle of an enormous duvet or something. It is the only time in my life that I couldn’t see the front of my own car. Fortunately every other driver in the city was smarter than me and stayed at home that night, so I could inch my way home on empty roads with my heart racing and my legs trembling like jelly. The lesson learned? Respect the haar, man.

I grew up in the West of Scotland, where rain is more of a driving hazard than fog. Not long after passing my driving test I drove a friend home after yet another disappointing game of football. While I was driving God decided to turn on his new power shower. That was the night I became familiar with the term aquaplaning. It was a horrible feeling to sense that the tyres were no longer touching the road. Thankfully it only lasted for a second or so but feeling powerless to control your car is possibly even worse than not being able to see anything at all. It’s a tough choice, though.

I have to confess that I have never had problems driving in the snow. My parents live on a really steep street and when growing up I used to laugh heartlessly as drivers struggled to go up it in the snow or careered down it recklessly. This meant that I have always had a healthy respect for the white stuff and always drive slowly while trying not to press the brake. It has worked for me so far.