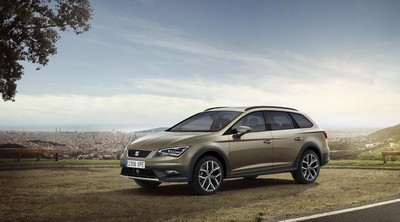 It’s nothing like the run-of-the-mill SEAT Leon we all admire because this new version has permanent four-wheel drive and is 15mm higher than usual – the result is the SEAT Leon X-Perience.

This means that the car should put in a decent off-road performance, obviously it won’t be matching SUVs clambering up mountains but it should be good on muddy fields and snow-covered roads which is a growing sector for carmakers to fill.

Safety is paramount for the SEAT Leon X-Perience

The car also comes with electronic stability control as well as a multi-collision brake system to help deliver the highest levels of safety.

To help the SEAT Leon X-Perience stand out from its siblings, it has extra body cladding on the sills and arches and the front bumper has an aluminium finish. There’s also from exhaust pipes and alloy wheels.

This new Leon comes with a range of impressive petrol and diesel engines and the most popular is likely to be the 2.0 litre TDI diesel which produces 182bhp and should return around 55mpg with CO2 emissions of 133g/km.

Get the SEAT Leon X-Perience on personal contract hire

To help economy, all SEAT Leon X-Periences come with eco-extras such as energy recuperation and stop-start.

The interior is also very different from other Leons with the X-Perience coming with a choice of upholstery, including leather, and trimmed with a unique orange detail. There’s also plenty of space on board, and a sizeable boot.

There’s no indication of prices as yet but the new Leon X-Perience will be available from the autumn and it should find a willing car buying market.