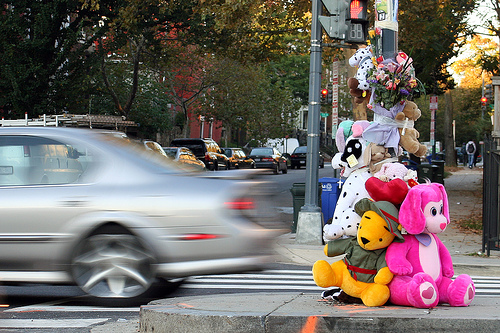 The latest Department for Transport road casualty statistics show a decrease of 2 per cent compared with 2012.

This is the lowest figure since national records began in 1926.

Reaction from Institute of Advanced Motorists

Institute of Advanced Motorists director of policy and research Neil Greig said: “The IAM welcomes the overall decrease in road deaths in 2013 which maintains the recent downward trends despite our roads getting a little busier as the economy picks up upward. We are however still killing nearly five people every day.”

“It is worrying that motorways have seen a 14 per cent increase in deaths which is only partly explained by a 1.5 per cent increase in traffic on them. It is vital that the government keeps a close eye on these figures as the Highway Agency rolls out its programme of widespread hard shoulder running as opposed to proper motorway widening.”

“The problem of death and serious injury among motorcycle riders remains and the IAM want to see more use of training opportunities and partnerships to improve both skills and attitudes.”

Royal Society for the Prevention of Accidents response

Kevin Clinton, head of road safety at the Royal Society for the Prevention of Accidents (RoSPA), a family safety charity with a history stretching back nearly 100 years, said: “These figures are good news and continue the long term reduction in death and injury on our roads. However, even with these improvements, there are around 5 deaths and 500 casualties a day on the roads, which shows there is still much work to do.

“We are likely to see more people walking and cycling in the coming years and we need to ensure people are able to enjoy these activities safely. This will require improving the environment by expanding the number of 20mph roads, safe pedestrian and cyclist routes and increasing driver awareness of the importance of sharing the road safely with these vulnerable groups.”

Brake has welcomed reductions in pedestrian and cyclist casualties, but it is too early to tell whether this is part of a longer term trend as these figures have seen increases in recent years. Brake remains concerned that these vulnerable road user groups continue to representa high proportion of road casualties.

To tackle this ongoing, needless waste of life and resulting suffering, and with a general election on the horizon, Brake is urging policy-makers to commit to three key pledges: