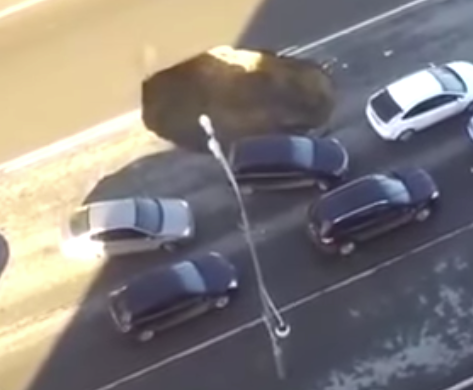 Sinkhole appearing in the road in Tyumen, Russia

Have you ever been driving along and almost run into a giant pothole? With the roads in the UK seemingly getting worse all the time there is a good chance that you have.

I keep hearing that the roads are getting worse and that motorists are now claiming huge amounts of compensation. The AA say that a third of its members have had their cars damaged in some way by potholes in the last couple of years. In England and Wales overall, the 2012 compensation figure was £22.8 million.  When it comes to cyclists, it seems that more than 1,000 are injured in pothole accidents every year.

Is this a new phenomenon or are our memories playing tricks on us? After all, John Lennon told us that there were 4,000 holes in Blackburn back in the Sixties. Having said that, he also said that he was a walrus and that a semolina pilchard climbed the Eiffel Tower, so let’s not rely on him for historical accuracy.

Instead, I asked a couple of elderly motorist relatives about their pothole memories. Neither of them could recall coming across many at all in the past and I have to admit that I can’t either.

Weirdly, the whole world is getting worried about potholes and scary sinkholes just now. In fact, the UK seems to have it fairly easy compared to other places. In Russia, the US and China giant sinkholes are opening up at an alarming rate.

This video shows motorists driving happily along in a Russian town. It seems like a perfectly normal day, or at least what I assume is a perfectly normal day for drivers in Russia. Suddenly, the road caves in and the drivers just manage to avoid it. Thankfully British drivers have avoided this kind of giant hole in the road up until now.

What pothole experiences have you had?