Just a year after launching its incredible Fiesta ST hot hatch, Ford has announced there will be a new flagship version of the model called the Ford Fiesta ST3. 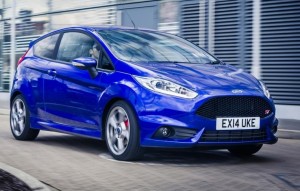 This new range-topping version will have lots of extra kit fitted as standard including cruise control and keyless entry.

The vehicle builds on the ST-2’s spec level and adds satnav, an auto dimming rear view mirror, automatic lights and wipers and a DAB radio.

With prices starting from £19,250, this is a £1,000 premium on the standard model and Ford is expecting a lot of interest in this impressive vehicle which will have a choice of five colours from launch and two colours for the interior theme.

Powered by the firm’s impressive 1.6 litre Eco-Boost engine, the Ford Fiesta ST-3 will go from 0 to 62 mph in just 6.9 seconds and has a top speed of 139 mph. With its six speed manual gearbox, the engine will produce 180bhp.

That’s a lot of power for the size of the vehicle and owners should expect economy of around 48mpg and CO2 emissions of 138g/km.

Sales will be boosted by the Ford Fiesta ST-3

There’s no doubt that the Ford Fiesta ST has been a great success for the firm with more than 6,250 units being sold which is around 20% more than was forecast.

Now Ford says there is a demand for a higher series model in the line-up and they are confident the Ford Fiesta ST-3 will meet that demand after the impressive ST-2 accounted for more than 90% of the model’s sales.

Since the ST was introduced to the UK car buying public, it has gone on to pick up critical acclaim and an impressive 25 awards including car of the year, Best Hot Hatch and best performance car from various national magazines.

Underpinning the vehicle success is its impressive handling with the Ford Fiesta ST offering performance tuned steering, brakes and suspension in addition to the firm’s Torque Vectoring Control which balances power between the front wheels to help improve control and acceleration through corners.

In addition, understanding its appeal to young drivers, Ford introduced its MyKey to the vehicle to restricts young and inexperienced drivers from losing control of the car and they also brought in emergency assistance connectivity in case of an accident.

Options for the Ford Fiesta ST-3 include rear parking sensors and the vehicle is on sale now with deliveries starting in June.