This impressive Countryman is the latest incarnation for what has been a global best-seller for Mini and hopes are high that this new model will impress and sell well too. 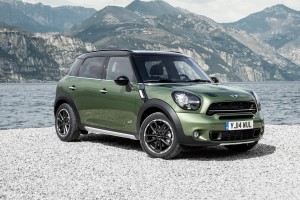 The Mini Countryman has been given a facelift that makes it look more like it’s new Mini Hatchback sibling with some impressive styling changes and the engine line-up have low emissions too.

However, the Countryman is the first Mini to come with four doors and five sees and have the option of all wheel drive model. There are also daytime running lights, though they are the modern ring of lights, as well as for new colours.

The impressive Mini Countryman Cooper S has been given more power from its 1.6 litre turbo engine which produces slightly more output at 190bhp which will see the car goes from 0 to 62 mph in 7.5 seconds.

The engines have also been improved and made more efficient and Mini has introduced lower rolling resistance tyres to help the car meet the strict Euro6 emmissions standard.

Mini Countryman has lots of kit

On board, the new Mini Countryman dashboard looks similar to that and the new Mini Hatchback as part of its refresh and the stylish anthracite-coloured dials help to keep it a sporty effect.

The new Countryman comes with a six speed manual gearbox as standard and there’s a very good thing to get automatic transmission available too, though some of the sportier models get shift paddles.

As you would expect there is a high level of equipment fitted as standard on the new model including air con, Bluetooth connectivity, rear parking sensors and a high-end radio system.

The new Mini Countryman is available to order now and will be available from June with prices for the new range being announced closer to that date though it should be a bestseller: the vehicle has already shifted 350,000 units around the world.