SEAT really is firing on all cylinders with its new Ibiza FR Edition which introduces a new four cylinder engine – but which only uses the cylinders it needs to get along. 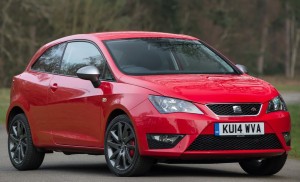 Called the 1.4 ACT (which stands for Active Cylinder Technology), the engine still has great performance: it will go from 0-62mph in just under eight seconds while returning around 60mpg on the combined cycled.

Economy is improved because the engines technology will shut off the second and third cylinders when the car is travelling at low speeds and it does this seamlessly and will reduce four-cylinder performance when needed.

It’s only available with a manual gearbox and the engine is around 12 mpg more efficient than the engine it replaces in the range.

The SEAT Ibiza FR Edition is also around £1,000 cheaper and the new model sits at the top of the Ibiza range and it has a number of features to help it stand out for the firm’s FR specification such as red brake callipers with matching coloured door mirrors, alloy wheels, tinted rear windows, climate control and red seatbelts.

The new model also stands out from the range and has a sleek design with headlights that have optional LEDs, a twin tail pipe and special bumpers.

There’s also a great deal technology aboard in addition to the electronic stability programme, SEAT of also added their electronic XDS system which helps deliver power when accelerating out of corners to help keep the steering true.

There’s no doubt that the sporty model in the Ibiza range will be a popular choice and we should expect to see quite a few on our roads even though most of the Ibiza line-up has good levels of handling and performance anyway.

Indeed, there’s not a lot going for the SEAT Ibiza FR Edition which has a nice level of styling, lots of kit and great performance that also has a good deal of frugal motoring too.

So for anyone looking for a hot hatch, the FR Edition will deliver on many fronts.

The SEAT Ibiza FR Edition is available now for lease or in the showrooms for £15,920.