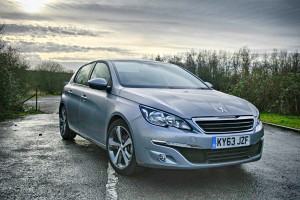 The previous generation 308 wasn’t really a bad car, but in a class dominated by very talented metal, and despite strong sales, it was nowhere near the top of the class. Peugeot knew this, which is why this new 308 is a clean sheet design from the ground up. But is it any good? 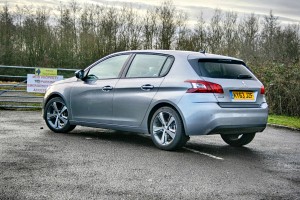 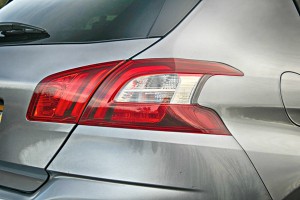 Wearing the same badge as the previous 308 – as Peugeot ran out of numbers – the model you see here is the first Peugeot model to sit on the company’s new Efficient Modular Platform (EMP2). It’s the same platform that can be found underpinning Citroen’s recently launched C4 Picasso range, and will soon appear on a number of PSA models to come.

It’s now the lightest model in its segment, having shed a staggering 140 kg model-for-model. It’s been made possible by extensive use of composite materials and aluminium as well as clever manufacturing techniques.  Peugeot claim that the sizeable weight reductions vastly improve economy, driving dynamics and refinement in exactly the same way as the smaller 208. 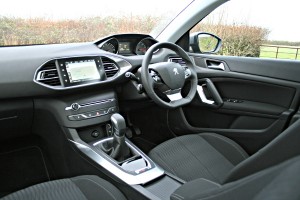 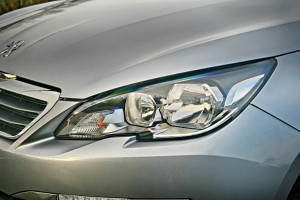 Peugeot’s styling team have certainly had a hard time over the last decade as the ‘gaping mouth’ syndrome infected the entire range putting many off. Thankfully they are back on top form and the frumpy looks of the old 308 have gone. The new 308 gets the brand’s new more mature styling first seen on the 208 and 2008 which is far from exciting and there is no denying the uncanny resemblance to the VW Golf. It may have simple surfacing but the 308 is peppered with neat styling touches such as the rear lights, which are particularly funky and are similar in shape to the iconic 306.

The cramped cabin from before has also gone, thanks again to the new platform, even though the 308 is now the most compact model in the class. It’s shorter and lower than before, but has a longer wheelbase and shorter overhangs. 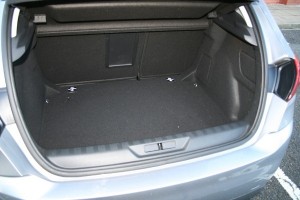 As a result the boot is the biggest in class, offering 470 litres of cargo space which expands to 1,309 litres with the seats folded. It’s also a good square shape so you can easily fit in a couple of buggies and the like. Space in the front is also generous, but I couldn’t help notice how cramped the rear seats are. There’s just enough shoulder room for three across the bench but legroom is lacking by class standard. Thick Golf-esque rear pillars also make the cabin feel a little dark unless you go for the optional panoramic glass roof fitted to the test car, but this does eat into headroom. 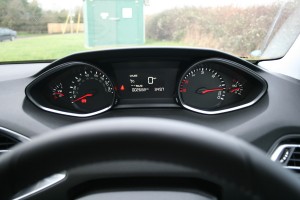 If you’re a fan of the smaller 208,s cabin, then you are certainly in for a treat, as the 308 adopts what Peugeot now calls ‘i-Cockpit’ which is essentially a dinky steering wheel with the dial cluster positioned much higher and more towards the windscreen. Although i’ve never experienced any issues with the layout of the 208, a lot of people have, but this time round Peugeot has been clever. By moving the rev counter and speedo further apart, reversing the direction of the rev counter and offering a little more steering column adjustment it’s quite a mission to obscure the dials. 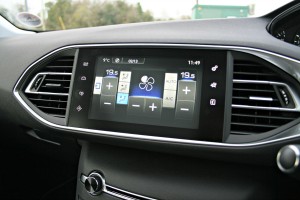 The rest of the cabin is a feast of plush materials and futuristic design with a superb 9.7” touch screen infotainment system taking pride of place in the centre of the dash. It’s the same system as you will find in Citroen’s C4 Picasso, and is used to control almost every function you can think of. It has also enabled Peugeot to reduce the buttons on the dash leaving just five. It certainly looks good and I find it very intuitive to use, but having to enter a sub-menu to adjust the climate control settings can be a touch annoying.

If you are a gadget lover like me, it’s refreshing to see such a sharp hike in the technology available on the 308, which includes full LED headlights, emergency collision alert, emergency collision braking, dynamic cruise control, blind spot monitoring, park assist and ‘Connect Apps’. 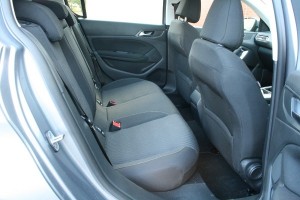 In typical Peugeot tradition, there’s a vast range of engines to choose from. Petrols start with a 1.2-litre 82 bhp three-pot all the way up to a 1.6-litre 156 bhp THP petrol. Diesels kick off with Peugeot’s trusty 1.6-litre HDi churning out 92 bhp (tested here) all the way up to a 2.0-litre BlueHDi with 150 bhp. In the coming months Peugeot will be adding a further engine to the range labelled e-THP, which is a 1.2-litre  turbocharged petrol unit in both 110 and 130 bhp outputs. 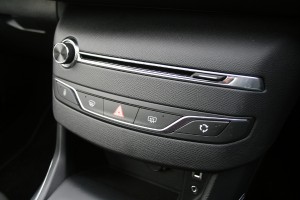 Clean and minimal switchgear in the 2014 Peugeot 308 HDi92 Active

The old 308 wasn’t much of a drivers car, but after a few minutes in the new model it  couldn’t feel more different. From the outset you really notice how quiet the cabin is with just a faint whiff of diesel thrum and on faster roads, both tyre and wind noise are kept well away.

The tiny steering wheel and lower driving position provide a sporty feel which is helped by a chassis far better equipped to deal with anything you put in its path, in a way the old 308 just couldn’t. For starters there is a new level of poise and agility when cornering. It’s also well balanced and irons out rough surfaces brilliantly even if the ride is a tiny bit firmer than Peugeots that have gone before.

Enthusiastic drivers can also have far more fun at the wheel thanks to fluid steering and generous grip from the wide tyres, although a touch more feel wouldn’t do any harm. The engine despite its modest 92 bhp pulls strongly all the way up to motorway speeds due to the lower kerb weight, making it easy to use the 230 Nm of torque which arrives lag-free at 1,750 rpm.

The only real disappointment is the five speed gearbox fitted to the example you see here as it has a long throw, and feels vague just like in other Peugeot applications, but luckily a much better six speeder is also available.

If you are looking for a car that won’t cost the earth to run then any 308 is sure to impress with emissions of just 99 g/km of co2 neatly placing the Active HDi 92 into tax-exempt VED Band A. With a claimed combined economy of 74.3 mpg, fuel economy is also impressive, making a tank of fuel last a lot longer than you would expect. Whilst with me I managed a steady 48 mpg.