If you were sitting in a parked car which got hit by a police vehicle, you wouldn’t expect to get arrested for it, would you? Strangely enough, this is exactly what happened to a chap in New York lately.

Perhaps this is a good point to digress for a second and explain about my experience with traffic cops in other parts of the world. I once had an accident on a motorway in South America and some police came along to take sketches and ask questions.

They didn’t seem to do a very thorough job of it, but I let get them on with it through a mixture of blind faith and non-existent Spanish skills. They appeared to move the vehicles before I saw them taking any photos but I put this down to them being incredibly quick at taking the initial photos. Anyway, since I wasn’t to blame for the crash what could possibly go wrong?

Time to get the toy cars out 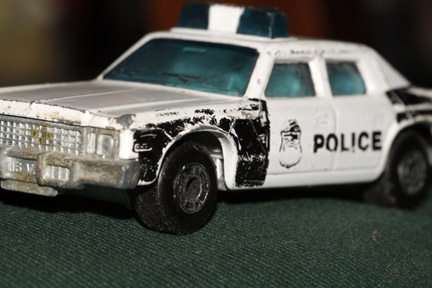 A couple of days later I was called into the central police station along with the other hapless driver. Aha, I thought smugly, now they are going to use some fancy program to re-create the accident and prove my innocence. To my utter bafflement the cop got out a very large sheet of paper and two tiny toy cars. He proceeded to roughly draw the motorway (completely out of scale) and then place the miniature cars on it. Like a kid playing with his first toys, he then went on to bash the two vehicles together and claim that the whole thing had been 80% my fault. I was left completely speechless at this stunningly lo-tech, retro style accident re-creation.

Thankfully for our buddy from Brooklyn, a neighbour’s house had a security camera which the police officers hadn’t spotted. The luckless driver – named Robert Jackson – spent a night in jail, but is now seeking damages from the local authorities.