The GLA 45 AMG is the impressive new crossover vehicle from Mercedes, and it’s likely to be a big success. 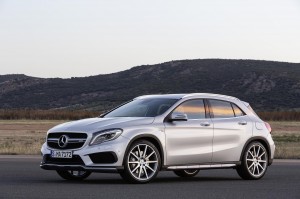 Set to make its debut at the Detroit Motor Show, this car will make an impression.

The idea behind the crossover vehicle, the fastest growing car segment, is for it to appeal to drivers who are younger than those who would generally buy the marque.

For many though, it looks and performs much like the Audi RS Q3, though the engineering and kit levels are similarly impressive.

The Mercedes GLA 45 AMG will have a turbocharged 2.0 litre four-cylinder engine which should outperform the equivalent Audi version and will have an impressive 355bhp of power.

The power is felt when the vehicle covers 0-62 mph in just 4.8 seconds, again this is quicker than the Audi and the top speed is 155 mph, which is electronically limited.

Essentially, the new Mercedes GLA 45 AMG will match the firm’s claim that this is an all-rounder with excellent driving performance and there is a sport suspension and antiroll bars to help keep the vehicle on track.

The carmaker has also introduced a high-performance braking system, and the steering calibration has been revised.

Interestingly, Mercedes have also added a lap timer to the equipment for the GLA 45 AMG and it should perform well on track days.

In addition, there are supportive sports seats, a sports exhaust and AMG badging.

Personalise your Merc with optional kit

Among the options list for the Mercedes GLA 45 AMG are bigger alloys, red brake calipers, bright decals and a carbon fibre rear wing.

If you fancy a Mercedes GLA 45 AMG to buy or lease, then you won’t be able to do so until June, though first deliveries arrive a few weeks later. However, you should probably start thinking about making a factory order decision in March or April.

The standard Mercedes GLA is available to order now, with prices starting at £25,850, though these won’t be arriving on our shores until June as well.