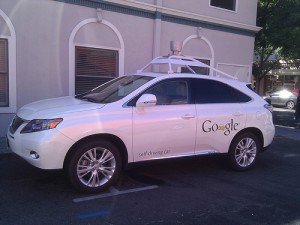 Frankly, nothing in the modern world surprises me anymore. If I came home one evening and found the TV eating my dinner or the phone trying on my trousers I would only give a slight shrug before going to bed.

However, is the idea of having cars which listen to us a step too far? Have the deranged geniuses at Google crossed the fine line between exciting new car technology and scary stuff that should have us worried?

Basically, a new patent application shows that Google want to make their driverless cars even more autonomous. This means equipping them with hearing devices as well as cameras. The explanation they gave for this is a bit weird. Apparently the car could pull up at traffic lights because it hears the beeping of the pedestrian crossing and the sound of feet shuffling across the road.

This sounds good in theory but what if the car next to it has the latest slice of pop perfection from Lady Gaga or Justin blooming what’s-his-face blaring out of it? Will the car just keep on going?  Even more strangely, they have suggested that the beeping noise at pedestrian crossings be replaced by the call of a bird. Eh? So does that mean the car will stop every time it hears that type of bird call? If you live next to a forest or a wood you are not going to get anywhere fast.

However, the previous points are all things that can be ironed out without much fuss. By chopping down all the world’s trees and banning music we can make sure that the listening car works to perfection. So what am I worried about? Well – at the risk of sounding like a paranoid freak who has a submachine gun and enough Spam to last 10 years in his secret bunker – don’t you think these could be used as spy cars? Let’s face it; a car with no driver but with a battery of cameras and listening devices could easily be used to snoop on us.  Does this idea worry you?

Do you think driverless cars that can listen as well as see is a good idea?