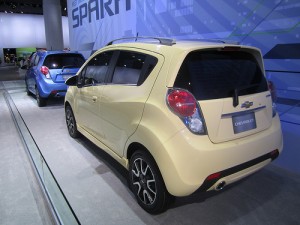 One of the world’s most famous car brands is to disappear from European forecourts in 2016. General Motors, the US car giant, has announced that it plans to withdraw its Chevrolet brand from Europe, in order to concentrate more on its Opel and Vauxhall brands.

From 2016, drivers in the UK won’t be able to drive the popular Chevrolet models on car leasing or contract hire plans. GM said that Chevrolet would no longer have a ‘mainstream presence’ in the region, largely thanks to ‘the difficult economic situation’.

Keep reading to find out more out the withdrawal and how this may affect the prices of used Chevrolet models.

General Motors to concentrate on Vauxhall and Opel brands in Europe

In 2012, Chevrolet sold 195,000 cars and SUVs in central and western Europe and the company has sold a further 137,000 cars in the first ten months of 2013. However, the firm has been losing money in the region and the decision has been made to withdraw the brand from sale.

GM said that ‘iconic vehicles’, such as the Corvette, would continue to be sold, and it would retain a presence in Russia.

GM chief executive Dan Akerson said the decision would “allow us to focus our investments where the opportunity for growth is greatest”. This meant focusing on Opel and Vauxhall and expanding its Cadillac brand in Europe, he said. “Europe is a key region for GM,” he added.

Withdrawal unlikely to have major impact on Chevrolet values

A leading car valuation service believes that the decision by General Motors to withdraw Chevrolet from the European market is unlikely to have a significant impact on residual values of used models. EurotaxGlass’s Group says the impact will be minimal, due to the orderly nature of the market exit.

Dean Bowkett, technical director and chief editor at EurotaxGlass’s, said: “We have already spoken to senior personnel within GM who have confirmed that warranties will be honoured and parts and service arrangements will be in place to satisfy the demand for repairs and maintenance of Chevrolet’s products going forward, many of which share common components with their sister brands anyway.

“Our contacts at Chevrolet have assured us that they are planning an orderly close down, over an extended period. This approach will have a minimal effect on the dealer network because the majority are already dual-franchised with Opel or Vauxhall and as such are likely to remain the approved Chevrolet repair centre.

“We have also been informed that stock levels are already low, which will negate the need for any fire sales from the brand during the transition period.”

The research involved a review of sales volumes, current residual values and parallels drawn from other high profile brand exits in the last ten years.

Bowkett added: “Different countries will react in different ways as the brand has had varying levels of success across Europe. The stronger the brand is in a country the more damaging this news is going to have on RVs.

“Taking into account the assurances from GM, the low volumes and the already relatively low residual values we see only a small impact on residual values in most countries.”