The boys at the Blue Oval have revealed that this stylish new Ford Ka is going to be a true global car and will be priced to dominate its sector. 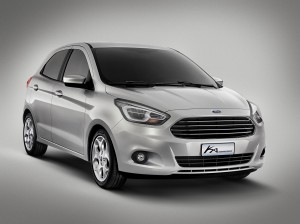 The original Ford Ka had lots of style and charm and took the motoring world by storm when it was first introduced but later incarnations, particularly the latest one which was co-developed with Fiat, have been less than successful.

Even though the current Ford Ka shares the same underpinnings as the Fiat 500, it has enjoyed nowhere near the same levels of success as its counterpart.

Now Ford aims to create a city car that will be packed with new technology generally found in larger cars in a cleverly designed package with incredible levels of fuel efficiency.

Ford Ka gets the impressive SYNC with Voice Control and AppLink

Among the gadgets for buyers will be mounts to charge mobile phones, satnav as well as the really useful SYNC with Voice Control and AppLink which enables drivers to make phone calls, play music and activate any useful apps.

The idea is that the driver can activate and interact with people, callers and applications without taking their eyes off the road and their hands off the steering wheel.

This sort of activity is being increasingly introduced in cars but Ford’s offering is much better than most others; it’s certainly more intuitive.

The new Ford Ka has a sleek design to help meet the increasing demand from around the world for a small car that delivers comfort and a fun drive. The small car market is predicted to rise by 35% when more than 6 million vehicles will be sold by 2017.

Most of that demand is coming from emerging markets, such as China, which is where the new Ford Ka will be sold initially before coming to Europe and the UK’s showrooms.

The new Ka will generate more interest the closer we get to the official launch and buyers can expect an impressive car – especially as it will have the firm’s ecoBoost engine and will be reasonably priced too.

While the current Ford Ka is a nice enough car, it doesn’t have the same handling abilities as the rest of its Ford stablemates and its interior is lacking.

The new Ford Ka will impress, and more than half of its components will be common, no matter where in the world it is sold.