I have always wanted to go to Berlin. Checkpoint Charlie, the Brandenburg Gate and what’s left of the wall are all pretty tempting. Now you can add a laptop driven car to the list of Berlin’s attractions.

A group of clever people at the Free University of Berlin have modified a VW Passat so that it goes and drives itself. All the lucky driver has to do it sit back, turn on the autopilot and serve themselves a glass of Spätburgunder to go with their curry bratwurst. 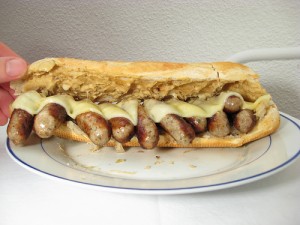 At this point the control has been taken over by a laptop which is connected to the vehicle’s electronics system by means of an Ethernet cable. It has been proven to be able to negotiate busy city streets with more ease than many humans can muster.

The secret to the Passat with a brain is in the laser scanner on the roof. This device produces a million data points every second in order to let the computer behind the auto pilot have a constantly updated map of its surroundings.  Cameras and radar sensors are also used, in addition to an incredibly accurate GPS system.

A While to Go Yet

So when can you expect to sit back and enjoy a bratwurst, a Cornish pasty or a Forfar bridie while being driven around like a king? I am afraid it seems as though the commercial production of a vehicle like this is a long way off.

The good news is that the most expensive cars in the luxury market are getting more autonomous features added to them all the time. For example, the new Mercedes S Class has a road scanning camera and a number of radar sensors built into it.

It seems fair to say that we can expect features like this to be added to our cars gradually until one day – almost before we know it – we are getting driving around by our cars at long last.

For the moment driverless cars can now be legally used in Nevada, California and Florida, thanks mainly to pressure brought to bear from Google, as they too are working on automated vehicle technology.