When the new Mercedes S-Class is launched it will become one of the most advanced cars technologically ever made. 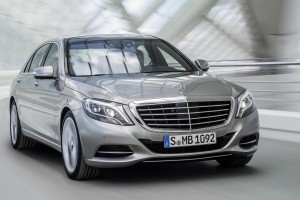 The model goes on sale in the UK later in 2013 and among its packed advances is the ability to scan the road ahead and alter its suspension accordingly.

The Mercedes S-Class pushes the boundaries in many ways and engineers have focused on the long wheel base version of the car for the new model.

Mercedes acknowledges that its new S-Class will help push car design into a new arena but, they say, that’s what S-Class buyers expect.

When it comes to safety, the 2013 Mercedes S-Class uses what the firm calls ‘Efficient Technology’ where comfort and safety are merged into one.

By realising this technology, Mercedes has improved fuel consumption to 64.2 mpg – quite a surprise for the size and weight of the Mercedes S-Class.

The executive car is also the world’s first car to dispense entirely with light bulbs in favour of LEDs – a big step for the firm that introduced electric lighting in cars in the first place.

The Mercedes S-Class also gets a new look with a larger radiator grille, while the car is more upright in design. With its long bonnet, the flowing, domed roof line and the gently slanting rear end, the new Mercedes S-Class has classic saloon proportions.

No light bulbs for the 2013 Mercedes S-Class

The lighting’s multi-level functionality is another world first: out of consideration for any road users behind, the intensity of the brake lights is reduced at night or while waiting at traffic lights. Almost 500 LEDs illuminate the road, the vehicle, the interior and the boot.

Visibility is enhanced by two assistance systems that have undergone some key improvements – Adaptive Highbeam Assist Plus and Night View Assist Plus. Thanks to a new stereo camera and multistage radar sensors, the S-Class has 360-degree all-round vision and detects potential dangers on the road better.

In its first year the Eco car line-up features two hybrid versions, a petrol model and a diesel variant which have class-leading efficiency and up to 20% lower fuel consumption than the outgoing model series.

You won’t need me to flag up the fact that running costs for this mighty car could be reduced by leasing the Mercedes S-Class rather than buying one.