For the first time, VW Beetle fans in the UK can order the legendary GSR model, some 40 years after the original model made its debut in the European market. 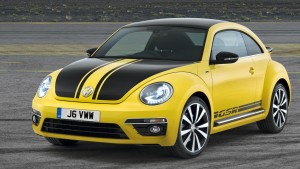 Sadly, only 100 sports cars will be offered for sale to British buyers in 2013 and just 3,500 will be sold worldwide – making it a true ‘limited edition’.

The GSR stands for ‘Gelb-Schwarze Renner’ in German, which means ‘Gold-Black Racer’.

The VW Beetle GSR has a legendary predecessor, the ‘Yellow-Black Racer’ which was based on the VW Beetle 1303 S and made its debut 40 years ago.  Only 3,500 of the original sports car were produced as well.

Volkswagen has re-interpreted the concept of the 1970’s GSR for the modern era.

Just like the GSR from days gone by, the body of the new version is yellow with the bonnet and the bootlid of the 1973 Beetle being painted in matt black, as were the bumpers, while black trim strips underneath the side windows and black/yellow side stripes above the door sills rounded off the look.

Now, yellow and black are the link between old and new – the bonnet and the bootlid of the new VW Beetle GSR are black once again, and this time so are the roof and the exterior mirror trims.

Black/yellow stripes with ‘GSR’ lettering ensure a unique silhouette above the side sills.  Yellow painted bumpers in new R-Line design and a larger than standard yellow and black rear spoiler complete the GSR look.

Unlike the older Bug – and for those who prefer something a little more subtle – the new Beetle GSR can also be ordered in Platinum Grey and Black.

The VW Beetle GSR has a 2.0-litre turbocharged 210 PS engine which will reach 62mph in 7.3 seconds and has a top speed of 142 mph. The hatchback is also expected to return a combined fuel economy of 38.7 mpg with CO2 emissions of 169 g/km.

The new VW Beetle GSR can be ordered with either a six-speed manual or DSG gearbox with the manual VW Beetle GSR costing £24,900 with a £1,500 premium for DSG.

The sports car is available to order now with first deliveries expected in September.