It’s been 40 years since the first Porsche 911 prototype appeared, and the Turbo’s place at the peak of technological achievement has never been in doubt. 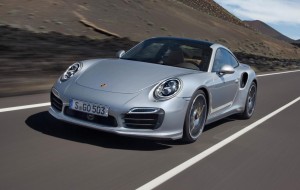 Now, with the unveiling of the new ‘Type 991’ generation 911 Turbo and Turbo S, the car’s reputation as a technology showcase combining the virtues of a circuit race car with those of an everyday road car reaches new heights.

Porsche 911 lovers are in for a treat!

The all-wheel drive running gear with active rear axle steering, adaptive aerodynamics, full-LED headlights and up to 560 hp from the flat six-cylinder twin-turbocharged engine underline the character of the Porsche 911 Turbo and Turbo S models.

The Porsche Dynamic Chassis Control active anti-roll system is offered for the first time on the 911 Turbo models and it helps to increase the dynamic performance potential even more.

Porsche have also increased the car’s power and managed to improve fuel economy by 16%.

Porsche is the only carmaker to offer twin turbochargers with variable turbine geometry on a petrol engine.

Power in the Porsche 911 is transferred to the drivetrain via a seven-speed dual-clutch transmission which enables an auto start/stop function with engine shut-off to activate earlier (ie when coasting to a halt).

Drivers can expect to see economy of around 29.1 mpg for both models.

It’s also worth mentioning too that the Porsche 911 has a new water-cooled all-wheel drive system which means even more drive torque can be directed to the front wheels if necessary.

Sprint times for the Porsche 911Turbo is just 3.2 seconds to go from 0 to 62 mph, slighter faster than the outgoing model.

You won’t need me to remind you that leasing a Porsche 911 Turbo is probably going to be cheaper than buying one.