The BlueMotion is one of the world’s most fuel-efficient family cars and we are about to see a lot of them on our roads. 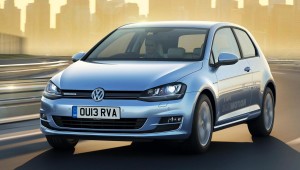 The new Golf BlueMotion offers impressive fuel economy of 88.3 mpg on the combined cycle, and CO2 emissions of just 85 g/km, and offers customer all of the Golf’s traditional attributes of practicality, comfort and safety.

The VW Golf BlueMotion’s fuel economy is 15% better than that of the previous-generation model, which emitted 99 g/km (now the emissions of a standard VW Golf 1.6-litre TDI).

The original VW Golf BlueMotion, revealed at the Geneva Motor Show in 2007, returned, at that time, a class-leading 62.8 mpg with emissions of 119 g/km – figures now surpassed by even the range-topping diesel, the 184 PS Golf GTD.

With its 50-litre fuel tank and 88.3 mpg fuel consumption, the VW Golf BlueMotion has a theoretical range of 970 miles.

Assuming an average annual driving distance of under 10,000 miles, most drivers will only have to refuel 10 times a year.  That’s just TEN times!

Road tax won’t be an issue, either – the VW Golf BlueMotion is in Band A, meaning it’s zero pounds a year.

VW have managed to reduce vehicle’s fuel consumption by using a lightweight design (including 26 kg less weight in the running gear and 37 kg less in the body) and engine-related modifications.

Other measures include super low rolling resistance tyres with higher air pressure, longer gear ratios for the six-speed manual gearbox, the Stop/Start and battery regeneration systems that are standard in all new Golfs, plus some specific aerodynamic modifications.

Prices for the VW Golf BlueMotion start at £20,335 for the three-door and rise to £20,990 for the five-door, with specification based on that of the standard Golf S with orders taken now being delivered in August.

While this is a great car and likely to save the average motorist a small fortune in fuel bills, it’s still important to see how much the VW Golf BlueMotion will cost with a leasing package to save yet more money.