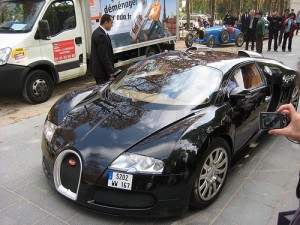 The Bugatti Veyron has just been named the fastest road legal car in the world, just a few days after this title was originally taken away from it.

The Veyron can go at speeds up to 268 mph and to be honest, I can’t even imagine what it is like to go at this speed. Would my ears pops and my eyes start to bulge like an astronaut’s?

Once the speedometer creeps over about 80 mph I start to panic and the all the blood drains from my face. Yes, I am a big, old fashioned scaredy cat when it comes to driving fast. Even the couple of minor accidents I have had came when I was driving about 5 mph.

Yet, I know that some people live for speed and couldn’t imagine tottering along like I do. Thankfully a lot of people drive like me in the UK but when I moved to South America everyone and his dog started overtaking me.

The other day I got overtaken by an ancient motorbike which had 2 adults on it and a couple of kids crammed in between them. I am now used to the sight of taxi drivers doing crazy, life threatening manoeuvres to get past me even when I think that I am going at a reasonable speed. Having said that, the taxi drivers here even overtake you when you are turning a corner or when you are overtaking someone else.

So, how fast would you go if you were plonked in the driver’s seat of a Bugatti Veyron and given the nod by the cops to crank it up as much you wanted to? If I was on a long, straight motorway with no one in sight and I had eaten my Ready Brek I reckon I would power up to 100 mph before losing my nerve. Our old 4×4 here has a bell which goes off once it reaches 100 km/h and I have yet to set it off.