Did you see that video doing the rounds in which someone is driving a Jaguar which is completely covered in snow? Well, except for the tiny little peephole which someone has cleared in front of the driver.

It got me thinking about how we all do silly things behind the wheel at times. I decided to try and blow away some of the fog from my memory banks and see whether or not I have done anything as silly as this in the past…

Almost Asleep at the Wheel 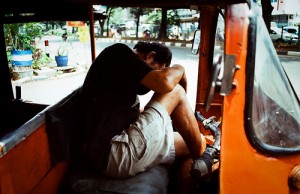 I have never truly fallen asleep at the wheel but I almost did once. It was after a night out at work and to get home I had to drive almost the entire of the M8 motorway at about 3 in the morning. It isn’t an especially long motorway but it is incredibly boring if you want to keep your leaden eyelids open until you reach your bed. I almost nodded off a couple of times and I can recall my sense of panic as I opened my eyes and saw that I had veered into the wrong lane. The lesson? Get a hotel room, you fool.

My father in law has a 4×4 here in South America which runs on either gas or petrol, depending upon what mood you are in. It has a little switch and you flick it over to change from gas to petrol. However, to get from petrol to gas you need to leave it in the middle (i.e. with no fuel entering the system) until the engine almost turns off, then you can safely change it to gas. The sensible driver pulls over and does this little operation at their leisure while admiring the view and maybe eating a cheese sandwich.

The foolish driver who is in a terrible rush tries to do it while driving and forgets to switch it to gas at the right time. The engine then cuts out right at a big roundabout, the foolish driver goes very pale and frantically fiddles with the controls. The lesson? Spending 5 minutes getting your fuel sorted out is better than risking 5 months of eating your food through a straw.

Have you ever done anything really silly while driving?