Growing demand for electric vehicles will receive a boost now that the impressive Nissan Leaf has begun production in the UK. 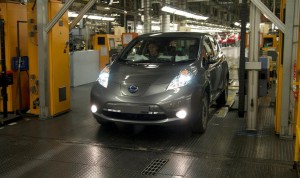 The Nissan Leaf rolls off the production line

The Nissan Leaf is being made at the firm’s Sunderland Plant and this new model has more than 100 updates, comes with a longer range and there’s quicker battery charging.

News that production started this week is the culmination of £420m investment in UK battery and Nissan Leaf production and will directly support around 2,000 jobs in the UK’s automotive industry.

The new Nissan Leaf for 2013 has updates aimed at making zero-emissions technology accessible to even more European drivers, including an increased driving range of 124 miles and the ability to recharge in half the time of the first-generation Nissan Leaf.

Since it opened in 1986, the Sunderland factory has produced more than seven million units- last year it racked up 510,572 vehicles and so became the first UK car factory ever to make more than half a million cars in one year.

With more than 55,000 Nissan Leafs on the world’s roads, and with two years of real-world zero emissions experience behind it, buyers of the new model can expect three new grades, a new interior trim and the addition of Nissan’s ‘Around View Monitor’ technology.

The suspension has also been tailored for European roads.

The new Nissan Leaf soon will be joined by all-electric versions of the award-winning NV200, to be called e-NV200, in both light commercial van and five-seat combi versions. Development of a dedicated EV taxi based on the e-NV200 is also underway. An Infiniti EV is expected in 2015.