Mini has unveiled its latest incarnation of its Mini Cooper Paceman model which has a new sporty exterior, lowered suspension and an improved interior. 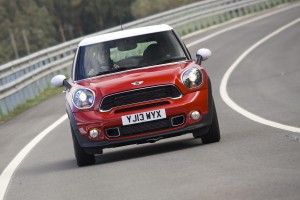 The Mini Cooper Paceman is not as well known as the Countryman though it is a better car which comes with a £1,000 premium.

Essentially Mini Cooper Paceman has been styled as a coupé interpretation of the Countryman and there are five versions are available from launch.

Among  them is the Mini Cooper S Paceman which has a 0-62mph of just 7.5 seconds. The seventh unique member of the family, it sells alongside the Hatch, Clubman, Convertible, Countryman, Coupé and Roadster.

Packed with Mini character it is built on the Countryman platform, bumper to bumper the car is 4,109 mm (4,115mm for Mini Cooper S Paceman and Cooper SD Paceman), which makes it almost identical in size to its sibling.

The Mini Cooper Paceman has been created to appeal to a new type of design-conscious customer looking for the promise of sporting performance, hence the lowered suspension.

The coupé-style stretched side profile features long doors, while the blacked-out pillars create a ‘floating’ roof concept, as already seen on the MINI Coupé. Available in either black, white or body colour, the roof gently slopes towards the rear of the car, ending at the integrated spoiler.

The horizontal arrangement of the rear lights, which accentuates the car’s width, is a first for MINI.

Also, the Mini Cooper Paceman is the only member of the brand’s line-up to be identified by a rear nameplate.

There’s a choice of four powerful four-cylinder engines, two petrol and two diesel. All come with a six-speed manual gearbox, or the optional six-speed automatic with Steptronic function for manual control.

Diesel lovers will enjoy the 1.6-litre 112bhp turbocharged engine with a 0-62mph time of 10.8 seconds. It provides owners with a frugal 64.2mpg fuel economy and 115g/km emissions.