Lovers of hot hatches will be eagerly anticipating the Clio Renaultsport 200 Turbo EDC which is available from April. 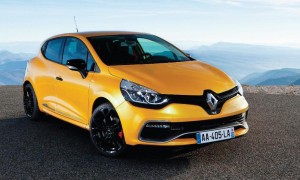 This is the first Renaultsport to feature EDC (Efficient Dual Clutch) transmission as standard. There are six gears selectable via aluminium steering column-mounted paddle shifters. The Clio Renaultsport 200 is the first sub-supercar to feature multi-change down function and they are a lot easier to control than you’d imagine.

Renault have also thrown in a load of other technical upgrades to ensure the Clio Renaultsport 200 remains the ultimate ‘hot’ supermini which include R.S. Drive with three driving modes to alter settings for engine, accelerator pedal, steering and ESC mapping. These are Normal, Sport and entirely manual Race (shift time ratio of under 150 milliseconds in latter).

There’s also launch Control and fully disconnectable ESC and ASR traction control (in Race mode) for the ultimate track car and the Clio Renaultsport 200 is also the first production car with hydraulic compression stops in shock absorbers (usually the preserve of rally cars).

The Clio Renaultsport 200 has some stiff competition from the new Megane and the Ford Focus ST (currently the best seller) but the Clio has always had a faithful following.

Though you might find this feature very annoying after a time.

As with all cars that have a strong fan base willing to part with their cash – and the Clio Renaultsport 200 has a host of nice optional extras – you should compare the leasing prices for this vehicle before actually buying one. I’m guessing you will be very surprised at the savings you could make.