This eye-catching beauty is the new offering from Alfa Romeo – the unusually named 4C. 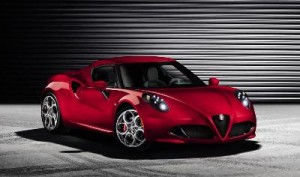 It made its debut at the Geneva motor show two years ago as a concept car and now the production-ready version is due to take a bow at Geneva’s next gathering.

The 4C is a compact mid-engine supercar with rear-wheel drive and two bucket seats and will be built at the Maserati plant in Modena, Italy.

The Alfa Romeo 4C is also going to be the reintroduction to American car buyers about what Alfa Romeo is all about as they re-enter the US car market.

However, the 4C will have a new four cylinder 1.75 litre turbo petrol all-aluminium engine. It also has Alfa’s TCT twin clutch automatic transmission – with a selection mode of ‘Race’!

The engine is a variant of the one used in their Giulietta Quadrifoglio Verde.

Alfa says the naming strategy is a nod to its great sporting tradition: the acronyms 8C and 6C featured in the 1930s and 1940s on its distinguished cars as they were fitted with the powerful ‘eight cylinders’ and the innovative ‘six cylinders’.

This car is going to be for sports car lovers who can be confident the car won’t roll on corners and is extremely agile – helped by the technologies used in Alfa’s 8C Competizione models.

There’s no indication of prices yet but the Alfa Romeo 4C will be available to buy (or lease!) later in 2013.