Vauxhall’s impressive new BiTurbo engine has now been added to the Zafira range. 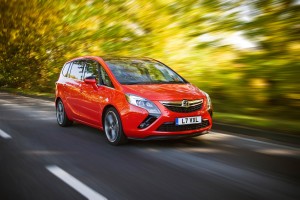 It’s already in the Astra and Insignia models, and the flagship diesel is really impressive with its state-of-the-art, sequential twin-turbo technology.

It might only be a 2.0litre variant but it will take the Zafira Tourer BiTurbo up to 135mph and reach 0-60mph in just 8.5 seconds which makes it one of the fastest diesel-powered seven-seat vehicles around.

Vauxhall’s engine uses start/stop technology so its combined fuel economy figure is 50.4mpg and its CO2 emissions are 149g/km.

There’s also some impressive torque going on which means you will see the Zafira Tourer BiTurbo pulling caravans and other big loads quite easily.

The Zafira Tourer range now has four diesels and two petrol engines in its line-up and there are a range of trims for anyone wanting the useful MPV.

Among the impressive spec for the Tourer is the FlexRide adaptive chassis control system, AFL adaptive forward lighting system and a panoramic windscreen. There’s also the firm’s latest Flex7 seven-seat interior – which effectively creates more room in the second row.

Vauxhall says this is one of the most powerful diesels in the MPV market – and on these figures it will outperform the more popular Ford Grand C-MAX.

The Vauxhall Zafira BiTurbo costs from £27,685 OTR and is available to order with deliveries being made in the Spring.