I’ve flagged up before on this blog that the new safety criteria for cars is going to cause manufacturers some serious headaches – and so it has come to pass. 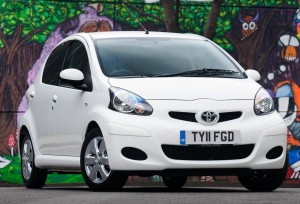 In what will, no doubt, be a regular update on progress, EuroNCAP has downgraded the Toyota Aygo (and with it, its ‘sister’ models the Peugeot 107 and Citroen C1) to three stars.

The models have dropped one star under new rules because Toyota hasn’t implemented the latest developments in passenger safety.

And this follows a fairly recent revamp.

What is worrying is that the tests were conducted on a model that has some of the new safety improvements – due to be launched in July 2013 – and it still failed to impress. The current model would have scored substantially lower marks.

Manufacturers will have to include new items such as side head curtains, electronic stability control, passenger seatbelt reminders, side thorax airbags and ISOFIX rear seats.

Generally, the newer the design the better the safety scores will be. The VW Up! (and therefore it’s ‘sister’ cars Skoda Citigo and Seat Mii) get five stars.

However, the newer slew of cheaper cars such as the Dacia Duster haven’t done as well because they don’t have the safety improvements.

These smaller cars are popular because they have Group 1 insurance risks and provide young drivers with a great – and safe – car to drive.

Dr Michiel van Ratingen, EuroNCAP’s secretary general said: “Our test protocols have evolved significantly over the past few years. There are more tests and the requirements have become more stringent.

“Despite this, many manufacturers have engineered their latest cars to achieve the highest score. On the other hand, we see that some manufacturers continue to offer popular best sellers without making the necessary incremental updates to safety.

He added: “It is those models that obviously fall behind other, more modern cars competing in the same category.

“With this non-standard equipment fitted, the Aygo achieves a three-star result; without it, the rating would probably have been much worse. Side impact airbags and electronic stability control are standard on many cars in this category and our tests demonstrate how important it is for manufacturers to keep their cars up to date when it comes to safety.”

In the coming year, I can predict, we will either see some popular models delisted because they aren’t ‘safe’ enough or we will have old models revamped badly in a desperate bid costing millions to make them safer.

What is confusing to car buyers is that the cars are as safe as they have ever been – it’s just the goal posts that have moved.

And I’m not entirely sure when all this plays out that is such a good thing for the motoring industry or car buyers generally.

There’s no doubt that the Vauxhall Corsa and Ford Fiesta are attractive cars and potential buyers should search out the discounts that will follow the EuroNCAP announcement in a bid to corner more buyers.

Or you could just lease one of them and be better off safety-wise and wallet-wise!