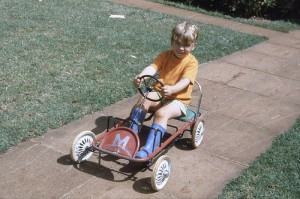 If you have been driving for a few years there is a chance that you have owned or used a string of cars in the past. My very first car was a blue Corsa and I remembered it the other day when I stood on some dog poo.

I am not saying that the car was in any way related to canine excrement. In fact, it served me pretty well for a couple of years before I decided that taking out an unreasonably big loan for a more unreliable vehicle would be a smart move.

A New Car and an Overly Excited Pooch

No, the  poop only really reminded me of that little Corsa because the first day I took it home I was all excited and took the whole family our for a ride, including the dog. Bruno. Sadly the thrill of a short journey along the UK’s highways and byways in a second hand Vauxhall was just too much for Bruno and he decided to soil one of the seats.

The worst part of it is that I had recently passed my driving test and now found myself on a ring road from hell which I couldn’t get off. We spent 3 years going round in circles. Ok, it might only have been 20 minutes but if you have ever been stuck in a Corsa with a pile of dog dirt and no idea how to get off the blooming road it probably seemed like 3 years to you as well.

Anyway, I am guessing that everyone has special memories of the first car they drove but it’s a shame that we often have to choose vehicles which are worse for wear due to financial reasons. If your first ever car was a blue Corsa with strange stains on one of the seats then I can only apologise, as I tried everything I could to get it clean.

One thought on “Do You Remember Your First Car?”