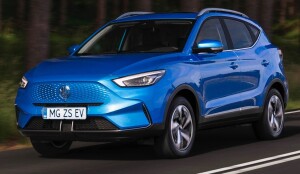 It comes hot on the heels of the Long Range model’s appearance, and the new Standard Range variant for the MG ZS car lease line-up offers great motoring value.

The ZS EV Standard Range will deliver 198 miles of range.

It’s also available in the same trims as the Long Range; SE, Trophy Connect and Trophy.

Plus, the equipment levels are the same regardless of battery size, but the ZS Standard Range is £2,000 cheaper.

And MG says that when using a rapid charger, the battery in the Standard Range can be recharged to 80% of its capacity in 36 minutes.

The electric motor is the same in the Standard and Long Range with the Standard offering more power at 176 hp.

This sees the 0 to 62 mph sprint time being improved by half of one second to eight seconds.

Prices start at £27,495 and deliveries begin this month.

There’s no doubt that the new MG ZS Standard Range offers great value for money motoring with an impressive specification, as well as a decent range.

It sits alongside the other MG plug-in offerings, the ZS EV and the new MG EV.

There’s also the MG HS plug-in hybrid and all of MG’s cars come with a comprehensive seven-year warranty.

A lot of equipment for the money

Drivers also get a lot of equipment for the money with even the entry-level SE offering adaptive cruise control, LED headlights and automatic air-conditioning.

The range-topper adds a live service offering with its iSmart infotainment system that delivers real-time traffic and weather updates, plus access to Amazon Prime.

For anyone considering switching to an EV, there’s a lot to recommend the all-electric MG ZS car lease whether in the Standard or Long Range variants, and the contract hire deals should be checked out.