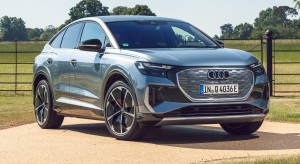 This is the all-electric Audi Q4 e-tron car lease range which has gone on sale with deliveries scheduled for October.

The Audi Q4 Sportback e-tron has also gone on sale and both models feature four specifications-the Vorsprung, the Edition 1, S line and Sport.

The batteries deliver an impressive all-electric range with the Q4 40 e-tron Sport offering the prospect of 316 miles.

Audi says that the models introduced their next phase in design language, and they closely resemble the concept cars that were unveiled in 2019.

The contract hire Audi Q4 e-tron and the Sportback e-tron offer lots of space in the cabin.

They should then deliver 80 miles of range when required.

The entry-level model uses the 52kWh battery which produces 170 PS from the electric motor and torque of 310Nm.

Both models will sprint from 0 to 62mph in nine seconds and then onto a top speed of 99mph.

The battery’s range on a full charge is 208 miles. 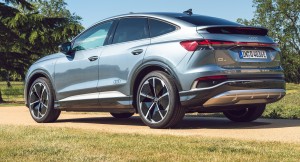 The larger 77kWh battery for the Q4 40 e-tron leasing range produces 204 PS from the motor and torque of 310Nm.

Its sprint in time is slightly faster at 8.5 seconds and will return a range of 316 miles.

The top model, the Q4 50 e-tron quattro uses the larger battery with an electric motor on each axle to deliver 299 PS and torque of 460Nm.

Its sprint time is 6.2 seconds, and the top speed is 111mph with the battery-powered range dropping slightly to 295 miles.

Equipment for the new Q4 e-tron

The Edition 1 model is the launch version and features matrix LED headlights, a hexagonal steering wheel with shift paddles and black exterior styling.

There’s also a wireless smartphone charger and a new augmented head-up display which places data and satnav instructions 10 metres ahead of the driver and this is fitted as standard.

The all-new Audi Q4 e-tron and Sportback e-tron car lease vehicles bring a new offering to a competitive segment and will be popular choices, particularly as contract hire vehicles.