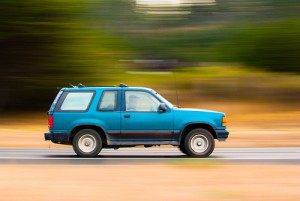 I guess that we all speed at some point. Well, apart from me, of course.
Actually, I have had my current vehicle for about a year and a half now. It is an old fashioned beast and I love the things like the altitude meter and the little symbol which shows you whether you are all a-tilt or on an even keel.

However, there is a feature I missed during this whole time. The other day my father in law was driving for a change and as he put his foot down a little ringing noise started going off somewhere. We were all lifting up seats and peering in ashtrays to work out what it was.

The Cows Make Me Go Slow

It turns out that the bell goes off once the speedometer goes over 100 km/h, which isn’t really all that fast all. It appears that I have used it on almost a daily basis for 18 months and not once put it over 100 km/h. In my defence, the roads here are pretty bad and you never know when you are going to hit a giant pothole or be confronted by an angry cow.

I was, therefore, a little taken aback when I saw that the UK’s worst speeder was caught doing, gulp, 152 mph. I can’t even imagine that speed these days. It happened on the A27 at somewhere called Binstead in West Sussex. The offending driver was riding a Yamaha motorbike at the time and it isn’t clear whether it was a model with a little bell that goes off over a certain speed, although I would guess not.

It seems that the number of speed cameras dotted about the roads doesn’t seem to be making that much difference to Britain’s speeders. Up on the A90 between Dundee and Aberdeen a couple of drivers were caught doing 149mph and 141mph respectively.