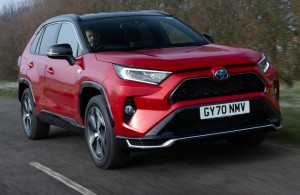 There’s a new plug-in hybrid for the Toyota RAV4 car lease range for drivers to enjoy.

The impressive Toyota RAV4 car lease range has been extended with a new plug-in offering for drivers.

But it’s for the opportunity of driving up to 46 miles on battery power that will grab attention.

The contract hire Toyota RAV4 plug-in is the firm’s most powerful mid-size SUV.

The 2.5-litre hybrid system delivers 302 bhp with the opportunity of zero emissions driving.

In its default EV mode, the plug-in RAV4 will cover the 46 miles easily – which is more than the average daily commute.

And the car is capable of reaching 84 mph on battery power.

Battery charging is safe and simple and can be done using a wall box in 2.5 hours.

However, the new plug-in RAV4 also offers the opportunity of fuel consumption of 282mpg, with emissions of 22g/km. 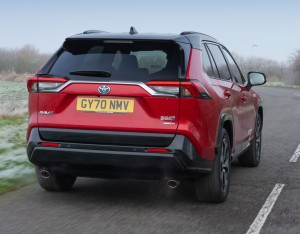 Drivers also get to enjoy a long equipment list including a reversing camera, smart entry and automatic folding door mirrors that have integrated puddle lights.

The Toyota RAV4 plug-in hybrid also features remote-controlled dual-zone air-conditioning so drivers can warm or cool the cabin before getting into the car.

The new RAV4 PHEV will cost from £46,495 and is the new entry-level spec for the range.

While the plug-in version will impress, the range-topper for the RAV4 lease line-up is the Dynamic Premium which adds black leather upholstery, a panoramic sunroof and memory activated front seats, a top-end stereo system and a head-up display for £50,895.

In an increasingly competitive segment, there’s a lot to like about the Toyota RAV4 plug-in hybrid car lease range with excellent fuel economy and this is a well-equipped and very safe SUV.