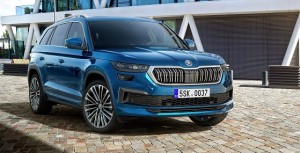 The popular Skoda Kodiaq car lease range has been facelifted with improved looks and more options.

The Skoda Kodiaq car lease range has been a popular seven-seater SUV choice and now it has been given a revamp.

The range-topper, the Kodiaq vRS, has also been given a powerful new petrol TSI engine.

The revamped Kodiaq will be in showrooms from July and the car leasing deals will be worth checking out.

The contract hire Skoda Kodiaq has a new-look interior and the option of ergonomic seats.

The ambient lighting function has also been enhanced and there’s the option of eco-seats with some trims offering vegan, recycled seat covers.

Drivers also get a virtual cockpit that features a 10.25-inch display.

Plus, there’s a new rear-end protection system that uses radar sensors to detect vehicles that may collide with the Kodiaq.

Engine for the Kodiaq 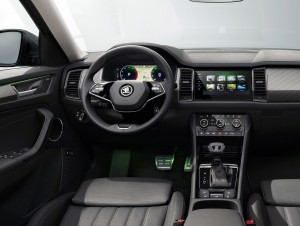 The new engine for the Kodiaq is a 2.0-litre unit developing 245 PS – that’s slightly more powerful than the previous turbocharged diesel unit.

The engine is mated to a new seven-speed automatic transmission for fast progress.

For those wanting to lease a car with a diesel engine, there’s a 2.0-litre turbocharged diesel unit producing either 150 PS or 200 PS.

Drivers also get a digital voice system – which is fluent in 15 languages – and a range of online features including radio stations.

Skoda is also planning new infotainment apps including whether and news features, and the ability to connect to a personal Google calendar.

The new Kodiaq also features a choice of wheels ranging from 17-inches, to 20-inches.

There’s also a new camera system that will detect objects and people in its path and intelligent lighting technology that will work automatically.

Skoda is also adding a new steering wheel to the stylish SUV, as well as ventilated and heated front seats.

The options include a sound system from a specialist audio maker with a 10-speaker setup.

The Skoda Kodiaq is the model that introduced the firm into the world of SUVs and it has proved to be a success since then – and helped lead to the creation of smaller SUVs such as the Kamiq and the Karoq.