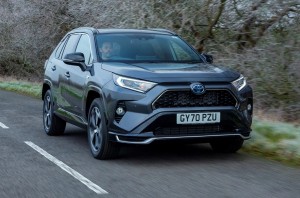 The new Toyota RAV4 plug-in hybrid is the new contract hire flagship for the range.

It boasts of class-leading power and efficiencies, and the new contract hire Toyota RAV4 plug-hybrid becomes the range’s flagship offering.

Toyota says that the new RAV4 is the most powerful and efficient version they have yet built.

Deliveries will start in April, and the order books have opened for what is likely to be a bestseller – Toyota has sold more than 10 million RAV4’s since launching in 1994.

The Toyota RAV4 plug-in hybrid car lease has an electric motor and a petrol engine producing a combined 302bhp which will outperform most rivals in the segment.

And, perhaps more impressively, the fuel economy is a claimed 282mpg – which makes this a very attractive contract hire offering.

In addition, with emissions of 22g/km, this car has a Benefit-in-Kind (BiK) rating of 6%.

The all-electric range is 61 miles around town which should meet the needs of most commuters. The top speed is 84 mph. 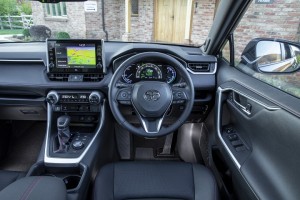 The latest Toyota RAV4 has four driving modes to suit the driver’s preferences or journey.

In Auto EV mode, drivers will be able to switch the RAV4 to deliver extra power when needed from the 2.5-litre engine.

Using a wallbox charging unit, the RAV4 will take 2.5 hours to recharge the battery and the cables for this are provided.

This model is the latest version of the RAV4’s fifth-generation which was unveiled in 2018.

And with the battery pack located beneath the cabin floor, it helps deliver a low centre of gravity and boost handling.

Safety features include various driver and safety systems to ensure the car and occupants can travel safely.